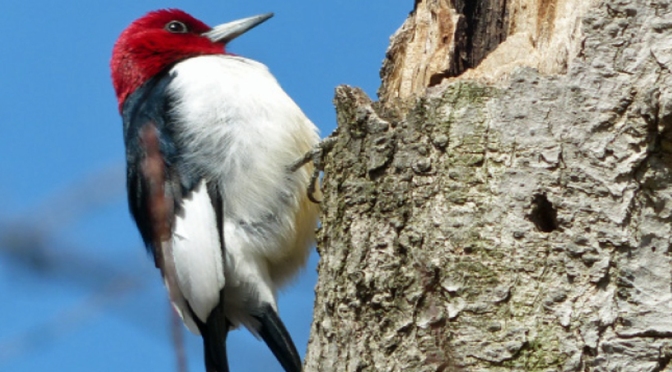 Somehow, I doubt that the Red-headed Woodpecker shot by Alexander Wilson upon his arrival here in the United States would have appreciated the fact that it was in part responsible for that Scot’s decision to go on to become the Father of American Ornithology.  However, so the legend goes.  Wilson shot the bird in Delaware, soon after getting off the boat and was so much inspired by it that he decided to devote the rest of his life to the study of birds in his adopted home.

The people who lived here were, of course, already familiar with the Red-headed Woodpecker before Wilson started waxing poetically about it.  This was in part because of the specie’s learning to love the new crops that were planted.  Red-headed Woodpeckers took their toll (albeit small) on fruits, peas, and corn.  Farmers started referring to them as shirt-tail birds, white-shirts, half-a-shirts, and flying checkerboards.  This was due to the distinctive appearance of the adult birds. 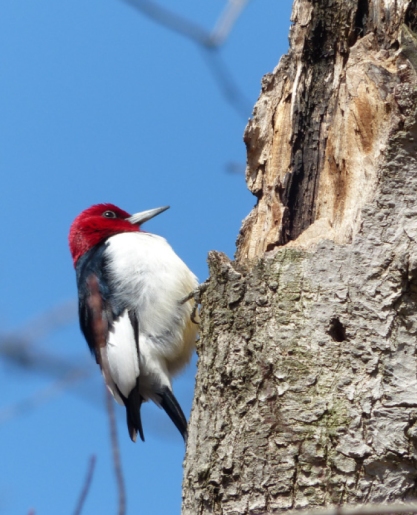 The adult of this species is definitely distinctive.  While male Red-bellied woodpeckers may have some red on their napes or heads, no other woodpecker in our area has a completely red head.  The dominant white wing patches really do look like shirt-tails hanging out as the early colonists claimed.  Immature birds also have these patches, although their heads are a brown-black shade.  Overall, they appear faintly streaky.  The breasts of mature birds are completely white, although once you spot that red head and those white wing patches, you probably won’t notice much else.

Red-headed Woodpeckers inhabit most of the Eastern United States, from Canada to the Gulf of Mexico.  Some northern and western populations have been shown to migrate, however, the extent of such movements is difficult to describe. It varies from year to year and may depend on the food supply.  Where migration does occur, it usually takes place at night in the Spring and during the day in the Fall.

Our Red-headed Woodpecker here in Carroll County generally stick around all year.  Beginning in May and June they start to exhibit obvious territorial behavior in connection with the mating process.  Red-headed Woodpeckers (along with Red-bellied Woodpeckers) tend to drum less frequently than other species, although they can still make quite a racket.  Chasing and calling is also part of the process.

The breeding season calls of the males have been described as rapidly repeated “queers” or “qee-arks”.  It’s year-round call note is more like a loud “tchur”.  And, of course, the bird makes other sounds as well.   Try listening to a good recording.

Red-headed Woodpeckers seem to prefer open stands of woodland, forest edges, or flooded creek bottoms for nesting.  Here, they excavate their own nest cavities.  These are usually placed around 40 feet high.  They seem to prefer trees that have been dead a long time with little bark still attached.  Utility poles and fence posts would also fit this description.  The birds find these to their liking as well.  If there is a previously excavated cavity or other natural one that fits the bill, the birds may use one of these too.

The nest itself is nothing to write home about.  While it may have solid walls, the furnishings would have to be described as “sparse”.  Here, the female lays four or five white eggs. (No need for camouflage if they are in a tree.)  Both sexes handle the incubation chores.  They have worked out a nice schedule.  The female sits during the day and the male takes the night shift.  Once the eggs hatch, both feed the young until they fledge in about a month.  After this, they may still be seen feeding together in family groups.

Red-headed Woodpeckers forage for food, rather than excavating holes to find it.  If you are lucky, you may even catch one flycatching from the branch of a tree.  The birds appear to prefer the more brightly colored insects in flight.

Of all the woodpecker species in our area, however, the Red-headed Woodpecker (along with the Red-bellied) is the most vegetarian in its culinary tastes.   It will eat corn and wild fruits, including mulberries, Virginia Creeper berries, and Poison Ivy berries.  As Fall approaches, the bird may store food by hammering it into bark furrows or other convenient holes.  Sometimes these caches are sealed over with a plug of moist wood fiber.  Such larders are jealously guarded and make up much of the bird’s Winter supply.

However, Red-headed Woodpeckers themselves are not above stealing sap from the wells made by Yellow-bellied Sapsuckers.  They may also create such wells of their own, not by drilling, but by pulling off bark to get at the cambium layers beneath.

In September, the family groups tend to split up.  This coincides with the annual molt of the adult birds.  The process take longer for the juveniles and may continue throughout the Fall and Winter.  Individual birds will set about establishing their own Fall and Winter territories to protect where they roost and feed.  The females seem to be able to hold their own in this process.  Perhaps the fact that they have the same coloration as the males has something to do with it.

Populations of Red-headed Woodpeckers tend to fluctuate.  There was a definite increase back in the 50s and 60s when Dutch Elm Disease spread across the U.S.  The use of pesticides in an effort to control the disease, however, probably did much to reduce any gains.  Red-headed Woodpeckers compete with a lot of other species for the foods they eat.

Squirrels, other woodpecker species, American Kestrels, Great-crested Flycatchers, and European Starlings are all looking for nest cavities too.

The Red-Headed Woodpecker has most of the same predators as other woodpeckers.  Northern Black Racers do climb trees and can be a danger to nests. According to John Eastman, in his Birds of Forest, Yard, and Thicket (on which this article was mostly based), one of the biggest dangers threatening the Red-headed Woodpecker is man’s desire to “clean up” standing dead timbers from woodlots.

In spite of any “tidy” humans, the Red-headed Woodpecker is still alive and well in Carroll County.  Fortunately, we can now enjoy this beautiful species without (as Wilson did)  having to lock and load.  While it may not necessarily show up at your feeders, count totals reveal that is still possible to find one (or more) if you look in the right places.