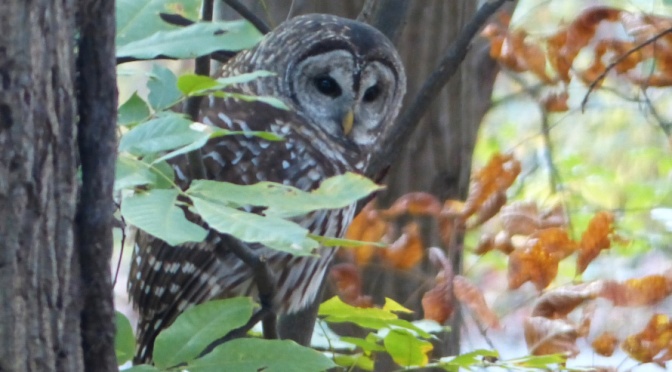 I recently had someone from a local newspaper contact me.  His boss had suggested he do an article on owling and he was looking for some advice.   I told him what I thought about it.  “You don’t find owls.  They find you,”  I said, “Especially at this time of year.”

Giving this some more thought later, it seemed that in the course of my birding life I had seen more Barred Owls than any other species.  Some of these owls had actually gone out of their way to meet me.

I remember one occasion when Bill Ellis and I were doing the Mid-Winter Count along Brown Road.  It was really cold and we were trying to figure out whether a yellow-bellied sapsucker hanging from a utility pole was actually frozen to its perch.  Suddenly, a Barred Owl that was sitting in the woods began hopping from branch to branch in our direction.  It seemed as if the bird was checking us out.

Another time, I was filling my bird feeders at home and looked up to see a Barred Owl watching me.  It had been raining for almost a week straight and I imagined that the owl had settled in near the feeders because it was having difficulty hunting elsewhere.  Bird feeders attract a lot of mice after the sun goes down.  (Not that you could see the sun with all that rain!)

Then there was the time I was working in the den at my computer.  The window there looks out into some evergreens.  I can also see the road that goes by the house.  Looking up from the screen, I spotted a Barred Owl sitting in one of the evergreens.  I’m not sure if he saw me or not.  He did seem interested in watching the cars go by however.

Such behavior is no doubt what prompted R.D. Lawrence in his book on owls to call the chapter on the species Neighborly Owls – The Barred Owl.  For a number of years, Lawrence observed a pair that nested in a large birch near his home in northern Canada.  Barred Owls mate for life.  The nest cavity was some 24 feet from the ground.  It measured 6 inches tall and 4.5 inches wide.  Barred Owls will use natural cavities or take advantage of those completed by Pileated Woodpeckers.  In a pinch, they might even resort to using the abandoned nest of a Red-shouldered Hawk, a Cooper’s Hawk, a crow, or even a squirrel.  This is rare however.

Egg-laying generally begins in March.  Before that, in January or February, the owls may become quite vocal.  Their call has been described as “Who-cooks-for-you? Who-cooks-for-you-aaall?” and it does actually sound like that.  Like other owls, barred owls may make different types of racket as well.  Hooting, barking, and screaming are also part of their repertoire.

Between two and five smooth, white eggs are laid.  No attempt is made to line the nest.  The female broods them herself.  The male brings her food.  When the chicks hatch in around 29 days, both parents spend most of their time seeing to it that they are fed.  This continues for four to five weeks until the young leave the nest.

Barred Owls generally hunt from a perch using both their excellent hearing and vision.  They may sit over water until a tasty fish swims by.  The thought of diving into a pile of snow to grab a passing rodent is also not unpleasant to them.  Their complete menu may include voles, shrews, mice, rats, squirrels, young rabbits, bats, moles, opossum, mink, weasels, some birds, small fish, turtles, frogs, snakes, lizards, crayfish, scorpions, beetles, crickets, grasshoppers, etc.  The species is definitely a generalist when it comes to food.

Some Barred Owls have pink belly feathers.Â This might be due to a crayfish diet. Otherwise, the Latin name of the species best describes its overall appearance.  That is Strix varia.  Varia means variegated or striped, or barred.  It has heavy horizontal barring on its throat and breast, while its underparts show dark vertical streaking.  The species has around a 42 inch wingspan.  Females are generally a little larger than males.  Unlike the Great Horned Owl, the Barred Owl has no ear tufts.  It also has brown as opposed to yellow eyes like most other North American Owls.

The range of the Strix varia is expanding.  While it covers most of the eastern portion of North America, it is spreading westward through Canada and then down again into Washington State.  This has caused some concern due to the fact that it may come into competition with the endangered Spotted Owl.  Hybridization is also possible, producing what has been referred to as a “sparred owl”.

Barred Owls are common here in Carroll County, so it is appropriate that the bird club uses it on our logo.  You may hear one pretty much anywhere during the mating season, although the birds prefer deciduous areas that are a little damp.  They also tend to become vocal again in October and November when the young owls are dispersing.  The birds are generally nocturnal and crepuscular, but they may call anytime.  If you are lucky, you can follow the calls to the owl.  Or, just relax and let if find you.