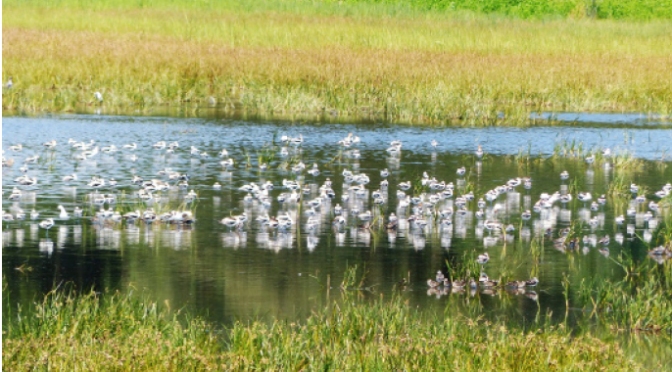 8/12/15
Last year’s midweek field trip to Bombay Hook proved to be so successful that it was decided to do it again. Seven of us met at the Park & Ride on Route 32 just below Route 26 in Eldersburg at 8:00am. Dividing up into two cars, we were soon off for a day of adventure and some good birding.
There was still an Osprey on a nest at the Bay Bridge. Some kids just never know when to leave home! We also saw the usual Great Black-backed Gulls here too. Otherwise, the ride across Maryland and Delaware was relatively uneventful.
Turning onto Bombay Hook National Wildlife Refuge itself, we had an encounter with a small covey of Bobwhite. This species could be heard all over the refuge. We stopped at the visitors center to check on any recent sightings. There was nothing rare or unusual listed there. Around the building itself, we heard or saw Gray Catbird, American Goldfinch, House Sparrow, Eastern Kingbird, and Red-tailed Hawk. There were also a number of butterflies there, including Red-spotted Purple and Tiger Swallowtail.
Proceeding to Raymond Pool, we soon added quite a few species to our list. These included Red-eyed Vireo, Barn Swallow, Snowy Egret, Mallard, European Starling, Great Blue Heron, Lesser Yellowlegs, Greater Yellowlegs, American Avocet, Black-Bellied Plover, Stilt Sandpiper, Short-billed Dowitcher, Marsh Wren, Bald Eagle, Forster’s Tern, Glossy Ibis, Semipalmated Plover, Common Yellowthroat, Laughing Gull, Blue Grosbeak, Bank Swallow, Marbled Godwit, Eastern Towhee, and Great Egret.

The Marbled Godwit was a very nice indeed, but it was destined to be lost among the hundreds of American Avocets. While we were standing there watching the show through our scopes, a refuge employee drove by in a John Deere tractor, mowing the grass on the side of the road. The birds must have been used to this activity since few of them flew off.
Shearness Pool was next. Here we had Black-necked Stilt, Semipalmated Plover, Glossy Ibis, Forster’s Tern, Least Tern, Semipalmated Sandpiper, Double-crested Cormorant, Pectoral Sandpiper, Caspian Tern, Canada Goose, Northern Pintail, and Green-winged Teal. It was nice to see some ducks other than Mallards for a change. It was also encouraging when, every now and then, a Monarch Butterfly would sail by on its way south.
While driving about in search of a picnic table where we could eat our lunch, we added Indigo Bunting and Tree Swallow to our species list. We never did find a picnic table, but instead stood by our vehicles at a dead end with a view of Finis Pool. A green heron joined us for a while as did a Northern Cardinal, an Eastern Wood-peewee, and a Red-eyed Vireo.
Working our way back towards the visitors center again, we soon spotted some Cardinal Flower growing in the marsh near the road. There were more birds too, including Carolina Wren, Eastern Kingbird, Orchard Oriole, Indigo Bunting, Eastern Towhee, Red-winged Blackbird, Cedar Waxwing, and a Blue Grosbeak perched in a Sweet Gum tree. When we had almost reached the visitors center, Bob heard a Grasshopper Sparrow singing nearby. The tune belted out by a Northern Mockingbird from the roof of the center itself was much more melodious.

From here, it was on to  Port Mahon Preserve. The road had been paved since our last club visit, so there was no need for us to any heavy work this time. Last year, the group pushed two cars out of the sand there. Situated where it is along the Delaware Bay, Port Mahon Road makes a great place to bird from the cars. And that is exactly what we did. Sitting out on the pilings were Royal Terns, Great Black-backed Gulls, and even an Osprey. The latter was having its midday meal – sushi, of course. On the shore, we photographed Ruddy Turnstones, Black-Bellied Plovers, Semipalmated Plovers, and Semipalmated Sandpipers. On the other side of the road, in the marsh, Bob pointed out some Giant Foxtail grass. I could never remember having seen this before.

Our last stop of the day was at the Ted Harvey Wildlife Management Area. Bob led us to a dead end with shoulder-high vegetation all around it. In typical Bob fashion, he commented on how things seem to have grown up since the last time he visited the spot. Thank goodness he know where he was going. Taking off into a growth of Phragmites that would have made a machete dull, he led us to an open area overlooking the marsh and a shallow pool. On the far sand flat sat a number of gulls and terns, including one that didn’t quite look like the rest. It was a Gull-billed Tern.

In the scope, the Gull-billed Tern’s was obviously not tern-like. It was thick and black. The bird was quite a way off, but eventually took flight and did come a bit closer. Everyone was excited. For some, this was a life bird. The species rarely strays so far north.

While we were waiting for the tern to hopefully fly closer, we also spotted Little Blue Heron, Black-necked Stilt, Snowy Egret, Swamp Sparrow, Common Yellowthroat, and Bank Swallow. Then, it was back through the Phragmites and into the vehicles. People seemed quiet on the way home. No doubt, they were thinking about the great day we had had in the field.