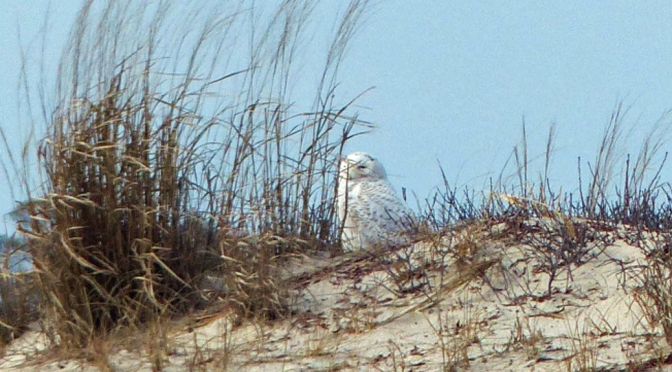 Because of the snow, the CCBC Presidents Day Weekend trip had to be rescheduled a week later. The plan was to meet at the Jetty in Ocean City around noon. Laura Tarbell and I drove down together. When we arrived, Bob Ringler, Bill Ellis, Dave and Maureen Harvey were still setting up their scopes. Debbie Terry from the Baltimore Chapter was also there.

It was a lot warmer than I remembered it being on previous winter visits, but still felt pretty cold when the wind blew. Scanning the water and the rocks we came up with White-winged Scoter, Surf Scoter, Black Scoter, Red-breasted Merganser, Common Eider, Common Loon, Herring Gull, Ring-billed Gull, and Bonaparte’s Gull. On two of the closest buoys sat some Purple Sandpipers. That seemed an odd place for them to be hanging out.

Piling into the vehicles again, we drove to Hooper’s Restaurant. Parking out back, we walked to the edge of the water. As we did, a Snipe flew up and away. Some of the stragglers missed it. Out on the water were Buffleheads, Brant, and Long-tailed Ducks. The latter species was actually quite numerous with large rafts of them extending left from the bridge. Other birds were sitting out on the sandbar. These included American Oystercatcher, Great Black-backed Gull, Herring Gull, Sanderling, and Killdeer. Bob thought he heard a Yellow-rumped Warbler somewhere in the marsh, but he could not find it for us.

On Griffin Road, which afforded a lovely view of the Lake Haven Trailer Park, we again stretched our legs. On the pond nearby were Ruddy Ducks, Coot, and Canada Geese. Mixed in with the Canada Geese was one Snow Goose. From the marshy area on the side of the road opposite that of the pond we heard frogs calling. The sound resembled castanets to me. Laura thought they were Pickerel Frogs.

On the pond in Bayside development were a lot of Redheads. Bob remarked that there were more than he could ever remember having seen there in the past. Other species included American Wigeon, Canada Goose, Ringnecked Duck, Gadwall, Mallard, Bufflehead, Lesser Scaup, and Ring-billed Gull. A bit farther down the road was a small parking lot with a trail that led past some boat racks and out to the marsh. From the boardwalk at the end, we watched two Northern Harriers as they tacked in the wind above the marsh grasses. The Belted Kingfisher that flew by was going quite a bit faster. There were numerous Greater Yellowlegs here. Seven of the birds were all clustered together out on a little hummock. They looked pretty silly.

Castaways Campground is traditionally a good winter birding spot. It was today as well. After stopping at the office to request permission to bird there, we drove down to the pier. Setting up our scopes, we scanned the water and the sandbars as far as we could see. Two Black-Bellied Plovers foraged nearby. Other species spotted included Killdeer, Sanderling, Dunlin, American Oystercatcher, Bald Eagle, Common Loon, Horned Grebe, Boat-tailed Grackle, Ruddy Turnstone, Red-breasted Merganser, Northern Harrier, Bufflehead and Black Duck.

While we were looking outward, Bill wandered off into the wooded campsites. We were about to call his cell phone to see where he had gone when he informed us that he had found a Brown Thrasher. It took a while to find the bird again so that all of us could see it. In the process, Bill thought he saw an Woodcock. Since Bill was the only one to notice the bird, the rest of us were dubious. We all scanned the underbrush, but could not find it. Not to be doubted, Bill decided to step off the trail and try to flush the bird. He had hardly take a couple of steps when out flew the woodcock. Good spotting Bill! We also had an American Robin here.

It was getting late in the day, so we decided to make one last stop at the Jetty. There was nothing new there. The next thing on our minds was dinner. After checking in at Bill’s townhouse, we went for dinner at Dumse

As is our usual plan on these trips, we drove to the Jetty first thing this morning to have a look at what was paddling about in the inlet. First thing in the morning turned out to be a bit after 7:00am. The first thing that I noticed wasn’t a sight, but rather a sound. I asked Bob what it was and he told me that the Black Scoters were calling. There were quite a number of this species in the water along with Surf Scoters and fewer White-winged Scoters. Long-tailed Ducks passed close by where we were standing.

Farther out, on the opposite side of the inlet, we could see other birds in the water. Red-throated Loons and Rednecked Grebes were both bobbing up and down on the waves. Those same waves made spotting the Common Eiders there more difficult. The birds played a game of “Now you see me, now you don’t” with us. If it hadn’t been for Leslie Starr and her very nice spotting scope, we might have missed them altogether. Leslie and Joe Turner of the Baltimore chapter were there when we arrived. Leslie found the eiders and put us on to them. They were pretty far out, but two of the birds came close enough that I could even see them in my own scope.

Other birds seen at the Jetty included two Bald Eagles sitting on some rocks on the opposite side of the inlet. There were also some American Oystercatchers and Purple Sandpipers about.

Before leaving the Jetty, Bob asked the group if we would like to drive down to Assateague and make an attempt at seeing the Snowy Owls. A number of the birds had been spotted on the dunes there. Finding them would probably require a bit of a trudge in the sand, but we were all game.

After crossing the bridge to the island, we first drove to the campgrounds along Bayside Driver. Here, we parked the car and began walking. There had been a Clay-colored Sparrow seen in this area since November. There were other birders looking for the bird as well. That made things easier. Surprisingly, it didn’t take all that long to find it. Other species here included Northern Cardinal, Northern Mockingbird, Red-winged Blackbird, Boattailed Grackle, Yellow-rumped Warbler, Belted Kingfisher, Chipping Sparrow, Eastern Towhee, Song Sparrow, Darkeyed Junco, Carolina Wren, White-throated Sparrow, and Fox Sparrow.

We then drove as far south as we were able without on OSV (Over-Sand Vehicle) permit. Most of us didn’t even have over-sand vehicles! Getting out of the vehicles we did have, we began walking. Some Horned Larks made the first part of the walk exciting. Soon, however, the sandy beach became a bit monotonous. There were a lot of other people walking as well. Most of them had come to see the owls.

Before long, we came to a small group of people with scopes standing around on the beach. (That is always a good sign.) Unfortunately, when we looked again, it was obvious that they weren’t really looking through their scopes. (Definitely not a good sign.) When we caught up with them, they pointed out the sand dune where the Snowy Owl had been sitting. It was very close and would have made for a great photo op. “If only you had been here a couple of minutes ago,” one of them said. I remember hearing that one before.

So, we started walking again. Anything we saw that looked large and white was fair game. We spent quite a bit of time scoping out one possible owl or another. One of the birds managed to take off from a point just ahead of us and fly south until it disappeared. On the wing, it was quite impressive. It seemed huge.

This sighting would have probably been enough to satisfy many. However, a couple of us spotted what looked like a definite possibility a little farther along. Walking a little faster now, we could see other birders setting up scopes on the beach and looking in the same direction. We slowed down again as we approached. Not was there just one owl. There were two. One was perched on a dune that was pretty close to the beach. The other bird sat farther back.

While the others were setting up their scopes, I focused my camera on the closer of the two birds. Then it happened! It being a woman with flaming red hair. She walked out from the dunes and headed straight for the owl. I remember hearing Dave trying to warn her off, but it was too late. Seeing people on two fronts was evidently more than the nearest of the two birds could deal with. It took off and disappeared.

Since this is a family publication, I will not repeat some of what was said to this woman or about her. Needless to say, she now knows how to approach wildlife in the field. Fortunately, the second owl did not bolt. We all had good views of it before heading back along the beach.

On our way, we encountered a ranger who was stopping to give everyone his little lecture on how to behave around wildlife. Better late than never I suppose. Someone pointed out the lady with the red hair to him as one who definitely needed a talking to. As we walked back along the beach, we could see the two of them engaged in a rather spirited conversation.

After lunch at Subway, we drove to Pemberton Park in Salisbury. The main focus here was the many well preserved historical dwellings and out buildings. There were also some nice nature trails. Unfortunately, there weren’t many birds. Our list included Turkey Vulture, Eastern Bluebird, Fish Crow, Bald Eagle, American Robin, Brown-headed Nuthatch, Hermit Thrush, White-throated Sparrow, and Blue Jay.

Since this wasn’t the usual long weekend at the Shore, we parted company here and went our separate ways. But, not before Debbie took a group photo!